Lena doesn’t know what all the hype of Christmas is about. She thinks it stinks so far. Okay so she got a cookie with breakfast but after that it was hard work!
I forgot to bring my GoPro out so I only had my phone camera.

Today was a day of firsts. 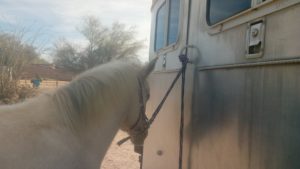 -Although I have picked up Lena’s feet and cleaned them out over the summer, she has never had them trimmed. First pedicure. Front feet only as I don’t want to make it overwhelming. She is still quite young.

Whenever I have picked up or cleaned her feet I have done it at liberty. Today it was time to start learning to tie. Not in a knot, of course, just wrapped around the trailer tie three times. Enough to not let her walk away but not enough to keep her there if something happened and she panicked. Since we have been working on leading, standing, backing, and all the other things on a lead rope over the summer, she understood not to walk away.

-Both front feet cleaned, trimmed, and filed.
She knows that “good girl” means she did good. We worked on that this summer. Scratching the best spots and giving treats while telling her “good girl.” That helped as I was working on her I could verbally let her know what she was doing was the right thing. I would also give actual scratches while giving her a break as a bigger reward. She did great.

In the fall I had taken Lena to the north side of the farm to see her sister, Juno. At the gate entrance to the north side there is a wooden bridge over the big wash. Lena stepped on it and decided it was not at good thing to walk on and proceeded to leap over the rest of the bridge to the other side! Today we started on the desensitization of walking on wood planks. After all, Shoshone did it for me in the spring when moving to the south side to the maternity pen. All I had to do was ask her and she walked right over. Time for baby to learn that she can trust me when I say it is okay.

I lead her up to the small (5 foot), partially covered, bridge over the small wash into my backyard. Of course she didn’t want to touch it. I had a bucket of hay by me to help with the big reward when she did come up. Each time I would encourage her to move forward a little further. She was not allowed to go backwards. If she did I would pull the lead rope with little tugs until the exact moment she made a forward motion. Forward motion doesn’t have to be an actual step at first. A forward motion can be as small as a shift of the body forward or a lifting of the foot with the intention of going forward. Always reward the absolute smallest of things at first so they get the idea then build on it. I wanted to reward not only for trying but for thinking about trying and concentrating on the task at hand.

Below are the videos I took with my phone. I did the best I could with one hand. Each time I stopped the video I gave her a break. We walked around the yard as I gave her scratches etc. to give her a mental break and reward. I didn’t want it to be overwhelming.

Video 1– I encouraged her to explore the bridge by looking, sniffing, and yes…licking. She is Licky Lena, after all. We had only been working less than a minute before I thought of getting my phone out to record.

Video 2– Lena takes one step onto the step in front of the bridge.

Video 3 – Getting a little stuck and attention going elsewhere but she stepped both front feet on the step and then a foot on the bridge! That gets a big bite of hay reward.

Video 4 – Another successful step onto the bridge. Getting a little more okay with it.

Video 5 – She is getting a little fidgety and nibbling the lead rope (she was getting a little mentally overwhelmed so she was looking for something else to do) so it was important she step on the bridge again so she can get another big bite of hay as a reward or I would have to give her a break from it. Getting her to step would reinforce the stepping on the bridge and getting hay idea. She did it!

Video 6 – She is getting comfortable with it. A little encouragement and she steps right up with both front feet and gets a big reward.

Video 7 – Much easier and quicker now. She steps right up and gets rewarded.

This is really the same principles I use for introducing probably most, if not all new things.
-Keep the focus but don’t let it become so challenging that you loose them mentally.
-Reward for the littlest of things at the beginning and build on it.
-Always let them know when they are doing the right thing.
-Give them breaks so they can mentally reset. After they did the right thing is a perfect time. They can process what just happened.